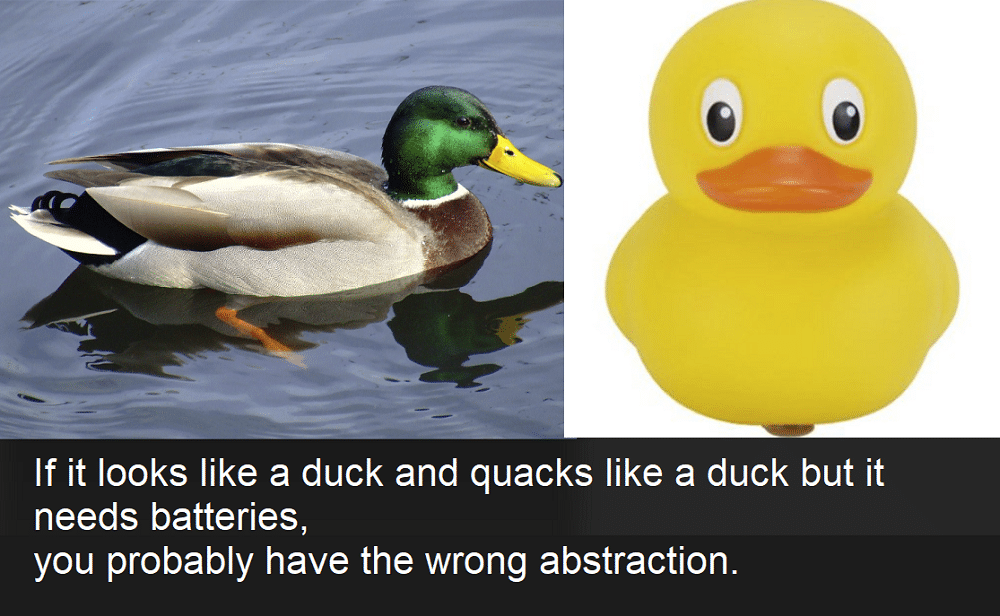 Formal definition of Liskov substitution principle is –
Let φ(x) be a property provable about objects x of type T. Then φ(y) should also be true for objects y of type S where S is a sub-type of T.

Or we can say – If class A is a sub-type of class B, then we should be able to replace B with A without disrupting the behaviour of our program.

Another way we can describe this as – If a piece of code that depends on an object of type P should be able to operate properly with objects of type C, where C is a sub-type of P.

While the other principles are concerned with coupling and cohesion, LSP stands alone in dealing with code correctness. The LSP is about semantic consistency in a type hierarchy. It’s not enough to implement the same public interface across said hierarchies, the behaviour should also be consistent.

Still cryptic, right?
Let me simplify with a code example:

There are three classes here: the ApiConnection class is abstract; because it has no code, has no properties other than it’s type signature. The ‘properties provable’ about this class are therefore only properties about its type which the compiler knows about and enforces on its inheritors.
So we can be sure that the inheritors also have these properties.

Another Way to Look at: Contracts

In language of contracts, Sub-types must respect the contracts of their super-types. Sub-types must pass the same set of contract tests that their super-types pass. Super-classes clients are constrained to their restricted domain, and sub-classes can extend this domain. All they have to do is preserving the “old behaviour” for the super-class in regular conditions. So that excludes what happens when contract is violated, because contract must not be violated.

For example the old client use super-class “Money” that prescribe “only positive values”. Thus using negatives are not allowed and raise exceptions, and should not be used. The subclass introduces the idea of debt; hence in that case negative money is allowed, as the precondition is weakened, which covers the case of no exceptions are raised anymore for negatives.

Now any contract tests meant to check “irregular behaviour” for the super-class (precondition violation) will behave differently for sub-classes. Because this negativity is not a violation anymore in the Sub-classes.

The Liskov Substitution Principle extends the Open/Closed principle and enables us to replace objects of a parent class with objects of a subclass without breaking the application.
This requires all sub-classes to behave in the same way as the parent class.
But; these 2 principles are not same concept and achieving one doesn’t mean automatically achieving the other one.

Violating one principle but following the other: Follows LSP but not OCP

Lets look at some code that follows LSP but not OCP.

The code does LSP because the context can use LiskovBase without knowing the actual type. We might think this code follows OCP as well; but look closely, is the class really closed?
What if the doStuff method did more than just print out a line?

The truth is; it doesn’t follow OCP; because in this object design we’re required to override the code completely with something else. This opens up the cut-and-paste issues as we have to copy code over from the base class to get things working. The doStuff method sure is open for extension, but it wasn’t completely closed for modification.

We can apply the Template method pattern on the above scenario. Here is that one way to close the doStuff method for modification and making sure it stays closed by marking it with final keyword. That keyword prevents anyone from sub-classing the class further.

Now this code follows both OCP and LSP.

Liskov substitution principle is about letting the user handle different objects that implement a super-type without checking what the actual type they are. This is inherently what polymorphism is about.This principle provides an alternative to do type-checking and type-conversion, that can get out of hand as the number of types grow, and can be achieved through pull-up refactoring or applying patterns such as Visitor.