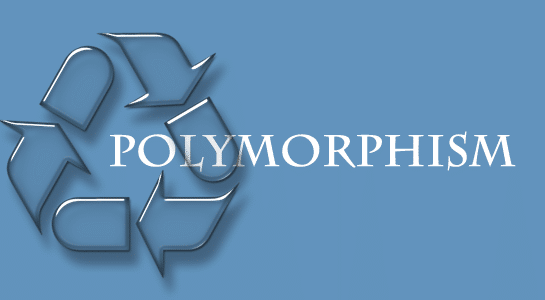 Let’s start from polymorphism basics with an example. Let’s have a hierarchy of shapes that are defined with each of the derived types overloading a base virtual Draw() method.  Next, we used a console application to define a list of each of the shapes. And to iterate over each shape in the collection calling the Draw() method of each item in the list:

When we run the application; we see the following lines in the console:

Note that the program calls proper Draw() method for each item in the collection. Most object-oriented languages achieve this polymorphic behavior is through the use of a virtual table consulted at run-time. It derives the proper offset address for an object’s method from the table. We refer to this behavior as “Dynamic Dispatch” or “Single Dispatch”.
So, how does this relate to Double Dispatch?
To answer this question, let’s next review method overloading.

When we execute the application; we see the following lines in the console:

Note that the parameter type determines which Draw() method to invoke.
But what happens if we change the Main() method to the following?

Executing this produces the following:

The typical example for the first one is a standard virtual method, which is polymorphic on the containing object’s type. And we can implement the second one via the Visitor pattern.

At runtime, when an object of the derived class is created and a method is called on it, the object will execute the overridden version of the method rather than the one inherited from the base class. This allows the derived class to customize the behavior of the method to suit its own needs, while still maintaining the same interface as the base class.

In this way, runtime polymorphism allows an object to behave differently based on its type, even if the object is referred to through a base class reference. This can be useful for creating more flexible and reusable code, as it allows different types of objects to be used interchangeably without the need to write separate code for each type.

Bringing All Together: Visitor Pattern

In C/C++, for the paradigm of separating function from data; our tools are functions and structs. Along the way; we have something called virtual function dispatching that allows us to have different function implementations based on the different type of data. This is a little something we like to call ‘polymorphism’ in the Computing world. In fact, polymorphism is a fundamental pillar of Object Oriented programming. It is also a form of what is called ‘single dispatch’, whereby we make a single function call and it’s dispatched to the proper implementation based on the data type. The compiler builds a virtual function table, and ensures that the correct function is called based on the type. So this example will be C++ syntax, to show virtual single dispatch.

So Single Dispatch, virtual function table, and data / function segregation.
Now, there’s a second type of Single Dispatch called ‘function overloading’; , but it doesn’t exist in C. In C++,  it’s done at compile time. Basically, the compiler picks the right function based on the type passed in. Something like this….

As I mentioned, this form of dispatching is only at compile time. The compiler has to know the type when selecting the proper overload. So something like below code won’t work –

However, the point is, that if we combine the two examples, we get ‘Double Dispatch’.  Now, if C++ supported this, that would be grand. But it doesn’t and the problem lies with what’s illustrated above. We can’t use a runtime type to do function overloading.

From this point forward, we’re going to use a image system as an example. In our image system, the image can be of different types, and we want to be able to apply some different action to the image; adjust color, crop, scale, black & white, etc. If we sketch our example in our fairytale C++ language that supports runtime type function overloading. It would look like this –

So as you can see, if this was to compile, we’ve done two things, we’ve separated our algorithms from our data; actions & images, and given ourselves the ability to apply different algorithms based on the different types of data. We’re using both types of single dispatch at once, a runtime polymorphic virtual function dispatch, when we call ‘apply’. Then a runtime function overload, with the argument passed in. That right there — is Double Dispatch.

Unfortunate for us that runtime function overload, doesn’t exist in C++. So we need to somehow invert our call, so that the compiler can be sure of the type when it compiles.

By inverting the dispatch of the action onto the image base, we can cause the dynamic dispatch to the action while knowing at compile time the type getting passed in. It looks like this.

So as we can see, in this example we’re emulating Double Dispatch, by inverting our calls. Which uses first polymorphism to make the correct call, and then a compile time overloaded function. Voila! Double Dispatch, kind of. This pattern lends itself very nicely when we need to separate your function, from our data. It allows us to easily expand data function, without having to change code in the data. However, additional data becomes a bit of a pain, because we need to change all of your function classes to support the new data class.

The visitor pattern is a software design pattern that allows adding new behaviors to existing classes without modifying their code. It is a way of separating an algorithm from an object structure on which it operates.

In the visitor pattern, we create a separate class called the visitor that contains a set of methods, each one implementing an operation to be performed on the elements of an object structure. The object structure is made up of elements that have an “accept” method that takes a visitor as an argument.

When we call the accept method on an element, it passes itself to the visitor’s corresponding method, allowing the visitor to perform the desired operation on the element. This is known as double dispatch.

Polymorphism is the ability of an object to take on multiple forms. In the context of the visitor pattern, polymorphism allows the elements in the object structure to be of different types, and the visitor’s methods can be written to handle each type differently.

Double dispatch is when the type of an object is determined based on both its class and the type of the visitor passed to its accept method. This allows the visitor’s methods to be written specifically for each combination of element and visitor types.