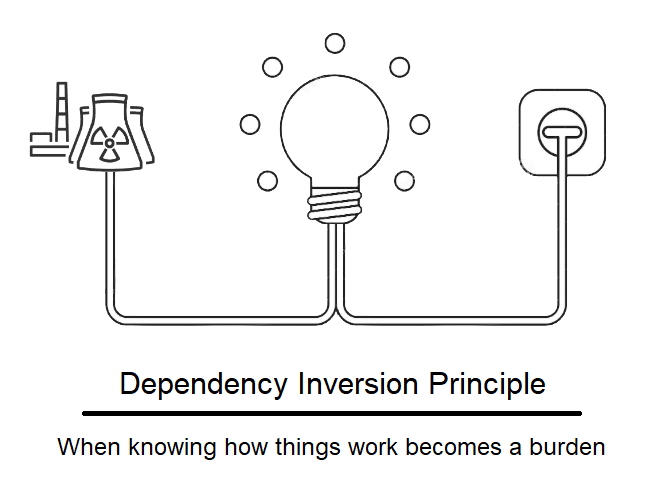 Contents hide
1 Dependency Inversion Principle in action
2 As both OCP and DIP both are discussing abstractions; OCP is similar to DIP, right?
3 Hollywood principle?
4 Such Confusion, Much Wow!
5 An Example; may be?

But why the term inversion?
traditionally, software structures had higher level modules depending on low level modules. E.g. it made sense to have a higher level module ButtonAtKitchen class handling inputs for a KitchenLamp1(lower level) and KitchenLamp2(lower level) class. Unfortunately that made software a lot more specific than it needed to be. So when we make the software more general by adding “contracts”, kitchen lamps are now dependent on an abstract Button class.
In other words the details are now dependent on abstractions instead of the other way around.
It’s direction is inverted now.

Here is an example of a PasswordReminder that connects to a MySQL database:

The PasswordReminder class should not care what database our application uses. To address these issues, we can code to an interface since high-level and low-level modules should depend on abstraction.

The interface has a connect method and the MySQLConnection class implements this interface. Also, instead of directly type-hinting MySQLConnection class in the constructor of the PasswordReminder, we instead type-hint the DBConnectionInterface and no matter the type of database our application uses, the PasswordReminder class can connect to the database without any problems. We don’t need to update or edit it; and open-close principle is not violated too.
This code establishes that both the high-level and low-level modules depend on abstraction.

As both OCP and DIP both are discussing abstractions; OCP is similar to DIP, right?

No, not really.
Although they both are discussing abstractions they’re conceptually different.
Both principles are looking at different contexts, OCP on one particular module and DIP on several modules.
For example; in the previous example; MySQLConnection are not extensible (nor currently has any requirement explaining they need to be).
The design is breaking OCP but follows DIP.

A common way of writing OO code is to to have code such as:

or code such as:

In both cases, the code is obtaining other parts of the system by “asking” for them.

With dependency injection/dependency inversion, the opposite (inverse) approach is taken:

Rather than the method asking for its dependencies, it is told what they are. This helps to reduce coupling within the system and makes testing a lot simpler. Further improvements are to then design to interfaces, rather than concrete types to further decouple parts of the system:

Because the method/class is being supplied its dependencies, rather than it needing to request them itself, the terms “tell; don’t ask” and “don’t call us, we’ll call you” are often used to sum up the behaviour of DI.

IoC is the general concept where control of flow is Inverted from client code to framework, which “Does something for the client”. SL (Service Locator) and DI (Dependency Injection) are two design patterns stem off from IoC.

Such Confusion, Much Wow!

DI (Dependency Injection) is a form of IoC, where implementations are passed into an object through constructors/setters/service lookups, which the object will ‘depend’ on in order to behave correctly.

IoC without using DI, for example would be the Template pattern because the implementation can only be changed through sub-classing.

DI frameworks are designed to make use of DI and can define interfaces (or Annotations in Java) to make it easy to pass in the implementations.

IoC containers are DI frameworks that can work outside of the programming language. In some we can configure which implementations to use in metadata files (e.g. XML) which are less invasive.

Dependency inversion principle is a fancy name for “coding to abstraction, rather than concrete implementation”.

In procedural programming, the Hollywood principle is not applicable. The flow of the application goes (mostly) from the top to bottom with possible loops, containing switches and conditionals, which decide what is the next action.

This means, the user has no control over the procedure execution, because it is predetermined by the software programmer.

DIP means, we do not know what exactly is going to be executed until the caller, usually the user of our application, wants to use (for example) some service.

An Example; may be?

We have an interface which institutes a contract that by calling the GiveMeNumber() method we will have an int to work with and also allowing us to use the ProcessNumber() method returning boolean and taking in an int as a parameter.

Somewhere in our app, perhaps the service layer, we can have a class depending on this interface.

Notice, how we are using some methods, but we do not have any implementation. The class FancyStuffService has no idea, what the implementations for the methods GiveMeNumber() and ProcessNumber() look like, but it knows, which return values it may expect and what to pass to them.

Naturally, without an implementation, the interface is pretty useless, so we implement two versions of the FancyStuff interface to provide the logic.

We have an implementation of our FancyStuff interface, we have a FancyStuffService which uses the interface, and we have to wire it all together.
But how?

In our factory pile, of course. That is where all the new operators in our application are, meaning it is a place where the objects are constructed.

And the variable fancyStuffId is exactly what we want. The integer could be populated during the runtime with an input from the user, perhaps via a selectbox, or any other method.

Only after a user inserts or selects some number, the factory is called, passing the user’s input into the factory, which in return creates a FancyStuffService for the user to use. Once that is done, there can be an event mapped to call the FancyOperation() method of the FancyStuffService class.

Also notice, how we do not know which implementation of the FancyStuff will be chosen until we really need it. That is the Hollywood principle at work.